Aw, man! You gotta try Uber!
Within 1 week of my being back in Atlanta after coming back from Spain, at least 3 of my friends said something similar to me.
Seeing the excitement on their faces got me all excited about it. What is this Uber I keep hearing about? Does Atlanta – with its clogged highways, its pothole-plagued streets, its mockery of a metro transit system – finally have something good going in the realm of transportation?
But, then my friend would explain it to me, and all I could think was, “Oh. So it’s a gypsy cab service.”
Atlanta is not a taxi town like New York or Chicago or even DC, where taking cabs is way more commonplace – where people take cabs to work, to the club, to buy eggs at the grocery store (ok, maybe not the eggs, but you understand what I mean). In those cities, cabs are plentiful, highly visible, and readily available. You can just stick your hand up in the air, and one will magically appear in front of you. I can’t even imagine trying to hail a cab in Atlanta. I’m not even sure an Atlanta cab driver would know how to respond if hailed. Probably peg you for an anti-semite or something. But anyway, my point is that in a town where hardly anyone takes cabs, why is everyone all of a sudden excited about… taking cabs? Because of an umlaut? Oh, wait. There’s no umlaut in Uber? Yeaah. Absolutely no reason to be excited, then.
But, I do admit, I am completely and utterly biased. You see, I’ve experienced the phenomenon that is blablacar. I’d never even heard of blablacar before going to Europe. Some of the other folks in my English teaching program mentioned it to me, and later, my roommate, who’d lived in Germany where blablacar has become popular, convinced me to give it a try. 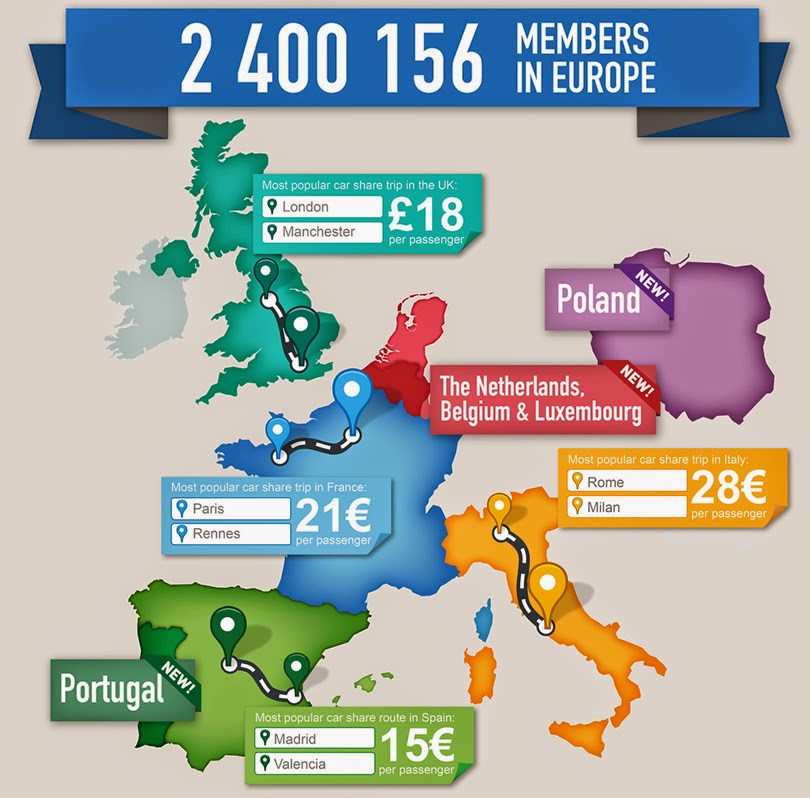 In a nutshell, this is how blablacar works:
Not too much different from how Uber works, from what I understand. So, what makes blablacar so much more impressive than Uber?
Let’s do a little comparison.
Today, a former co-worker of mine tweeted all in a tizzy that he had just paid “$10 to go from work to the Falcons game!” I decided to see exactly how far that was. A quick check on Google showed me that the distance from the building we worked in to the Georgia Dome where the Falcons play is right around 3.5 miles.
For my first blablacar trip, I went from my home base of Marbella to Cádiz – almost 180 kilometers away – for 10€. In American English, that translates to about 13 dollars for a trip of about 110 miles.
Can you see why I fail to be impressed?
One of the reasons blablacar is so much cheaper is because it’s a true rideshare. Drivers aren’t looking to make a profit off of providing a ride, they’re just looking to share the cost of the trip. You may be in the car with only one other person, or, as is more often the case, you might be packed in with 2 or 3 other strangers like brand-new siblings on a road trip. Except, I never had anyone threaten to turn the car around and take us ungrateful kids back home. In fact, everybody I shared a ride with was really a pleasure to talk to, engaging, even polite. During my almost 6-month stay in Spain, I ended up using blablacar at least 6 more times. I was absolutely sold on the service. But, I wondered why I felt like something like this could never work back home in the States?
Last night, I heard an NPR segment on Lyft, which is supposed to be more of a rideshare model than the just-like-a-taxi-but-cheaper model that Uber uses. But, when I did a little digging, the prices were pretty comparable between the two services. The only thing that really seemed to be different was that, with Lyft, you get to ride shotgun, and, your driver might give you a fist bump. There’s also something about the car wearing a pink mustache.
Really?
Ok, to be fair, there are other benefits that Uber and Lyft offer that blablacar doesn’t. Like the fact that you don’t have to be bothered with cash, and that you can track where your driver is and when he’ll arrive with a handy mobile app. But, at the end of the day, I don’t care about those things that much – they’re added features, not core requirements. There is the matter of safety, though (or at least perceived safety). Uber and Lyft both offer the security of an insurance policy and both perform background checks on their drivers. As far as I could tell from perusing their site, blablacar operates totally on the honor system.
According to a recent New York Times article, blablacar is growing throughout Europe, but it won’t be coming to the US anytime soon. So for now, I guess it’s better to have some alternative to regular taxi service than none at all. I guess I can see why my friends would be excited about that.
But for me, no vale la pena.