The bus ride to my new town was comfortable and largely uneventful. From Seville, we traveled maybe an hour or so to Ronda. Along the way, I was treated to an up-close view of the southern Spanish countryside, which honestly looked rather hardscrabble and barren. Rocky ground with clumps of low shrubs and wild grasses. Low, rolling hills everywhere and every couple of minutes, large patches of land with neat rows of what I’m guessing were olive trees (some orange trees, too). 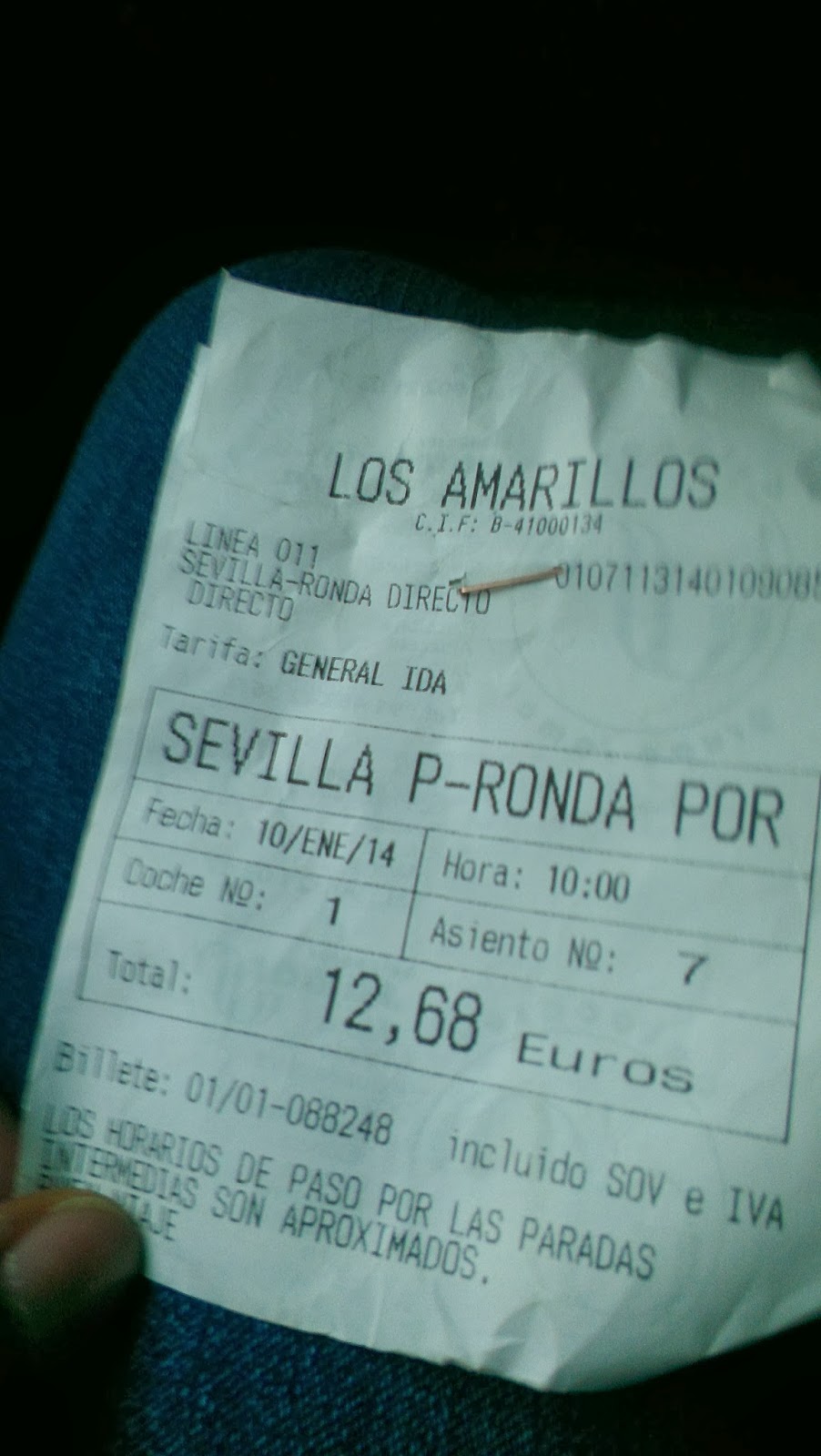 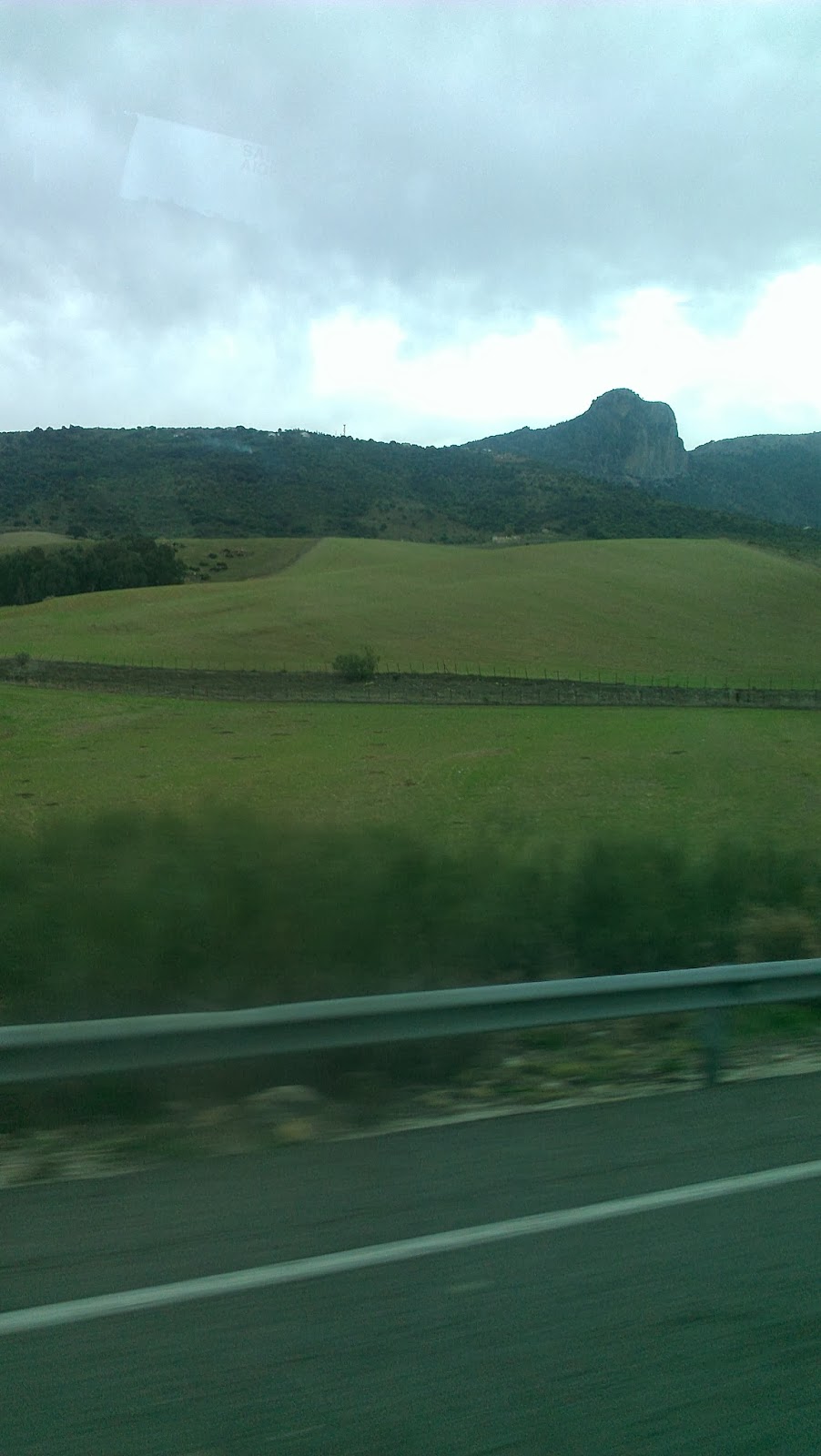 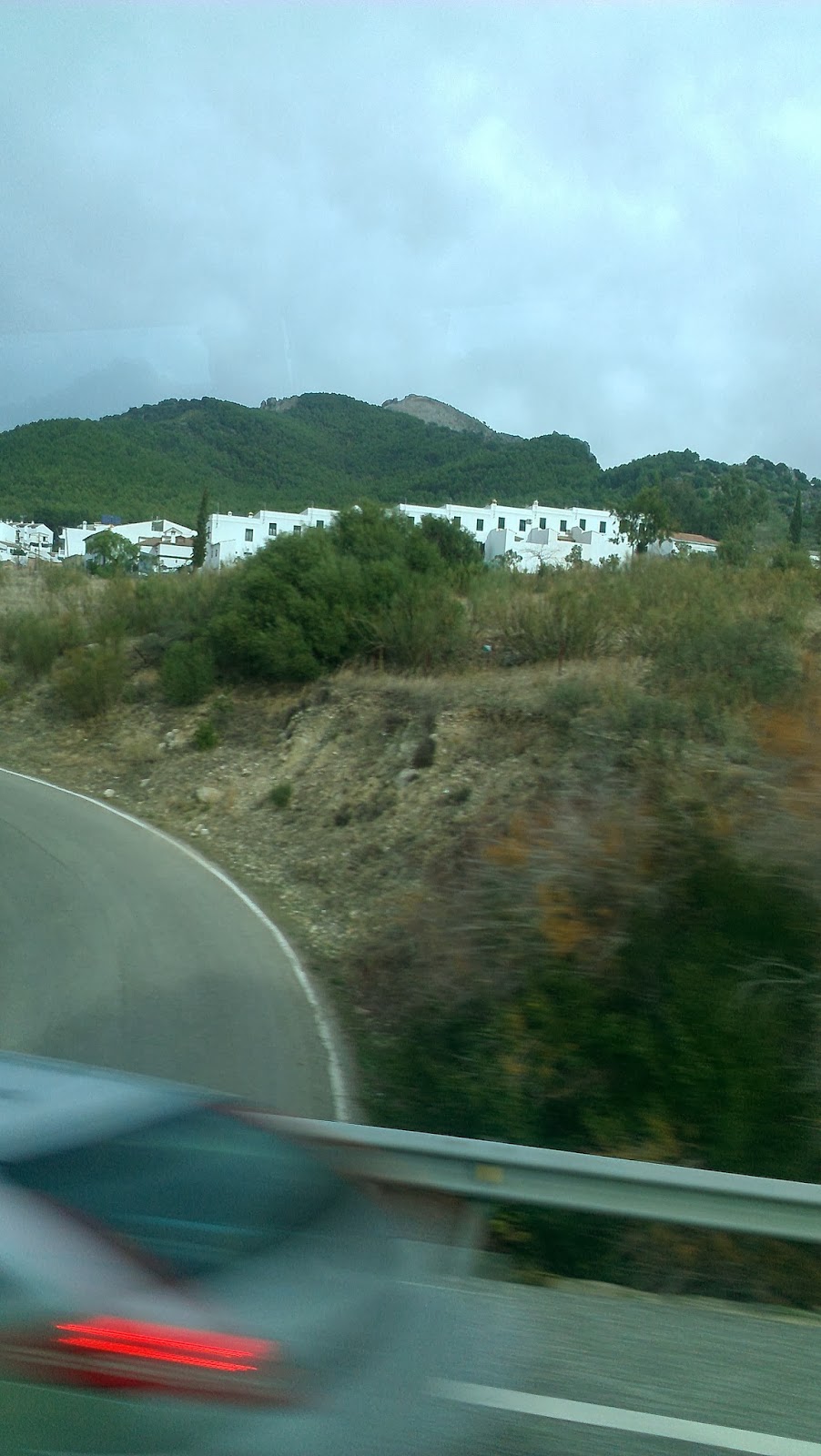 One interesting note is how many Japanese people were also on the bus. In Seville, one of our tour guides had mentioned that there were Japanese people everywhere, and he said it with a kind of distaste in his voice. Japanese people can be kind of obnoxious tourists, much like Americans, I’m sure. All the ones I’ve seen so far have way too much stuff with them and they seem to have a camera jutting from every orifice or hand. Once we made it to Ronda, most of them disembarked. Only a couple remained for the trip to San Pedro.

We had a brief 20-25 minute stop in Ronda – which seemed like a very charming traditional Spanish town. I made a note to myself to add it to my list of places to visit before leaving Spain. The passenger makeup of the bus changed to mostly abuelitas (grandmothers) for the Ronda to San Pedro leg of the trip. Soon, the low, rolling hills changed to steep mountains with lazy clouds drifting by. We were now passing through the Sierra de los Nieves. 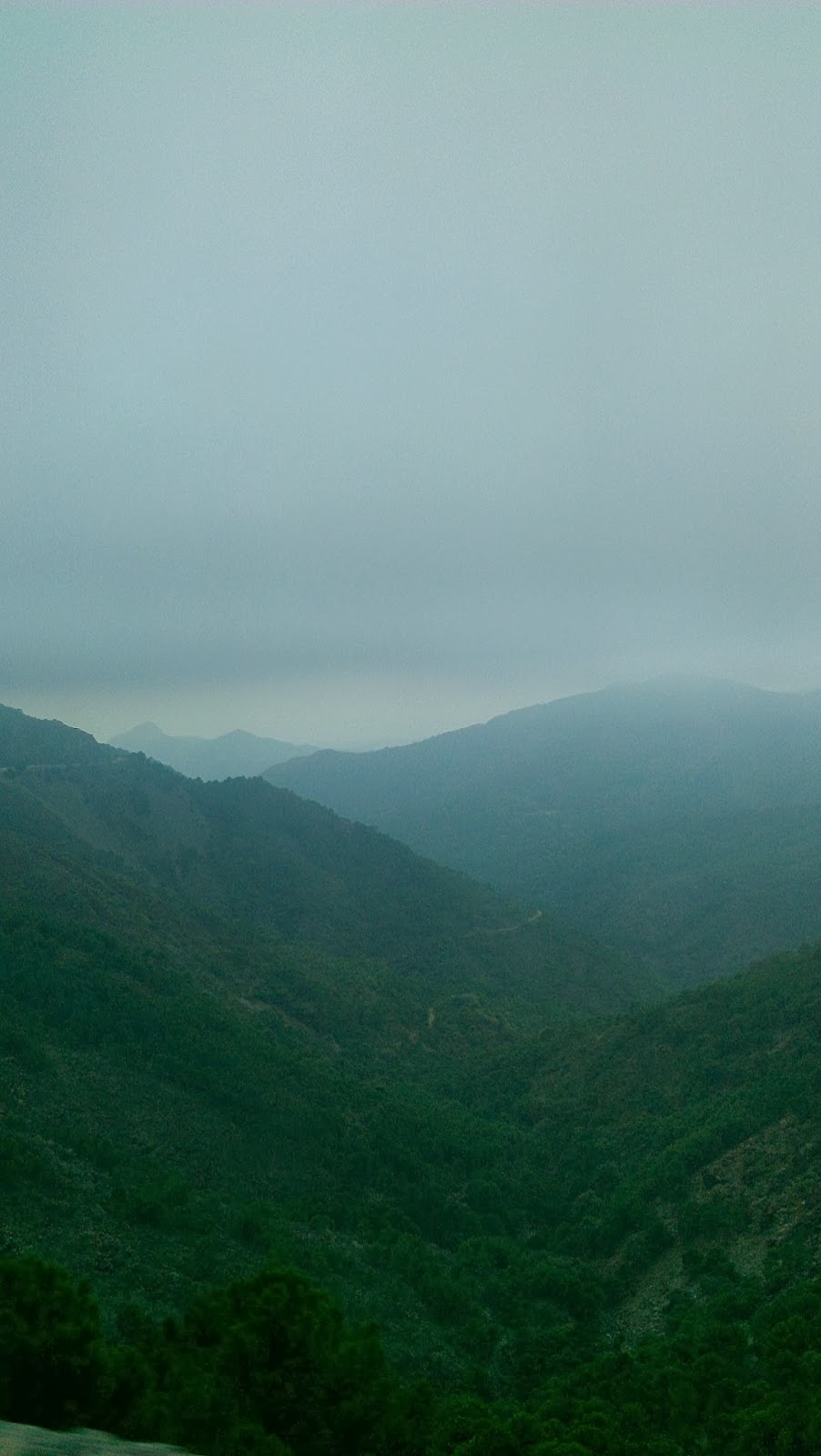 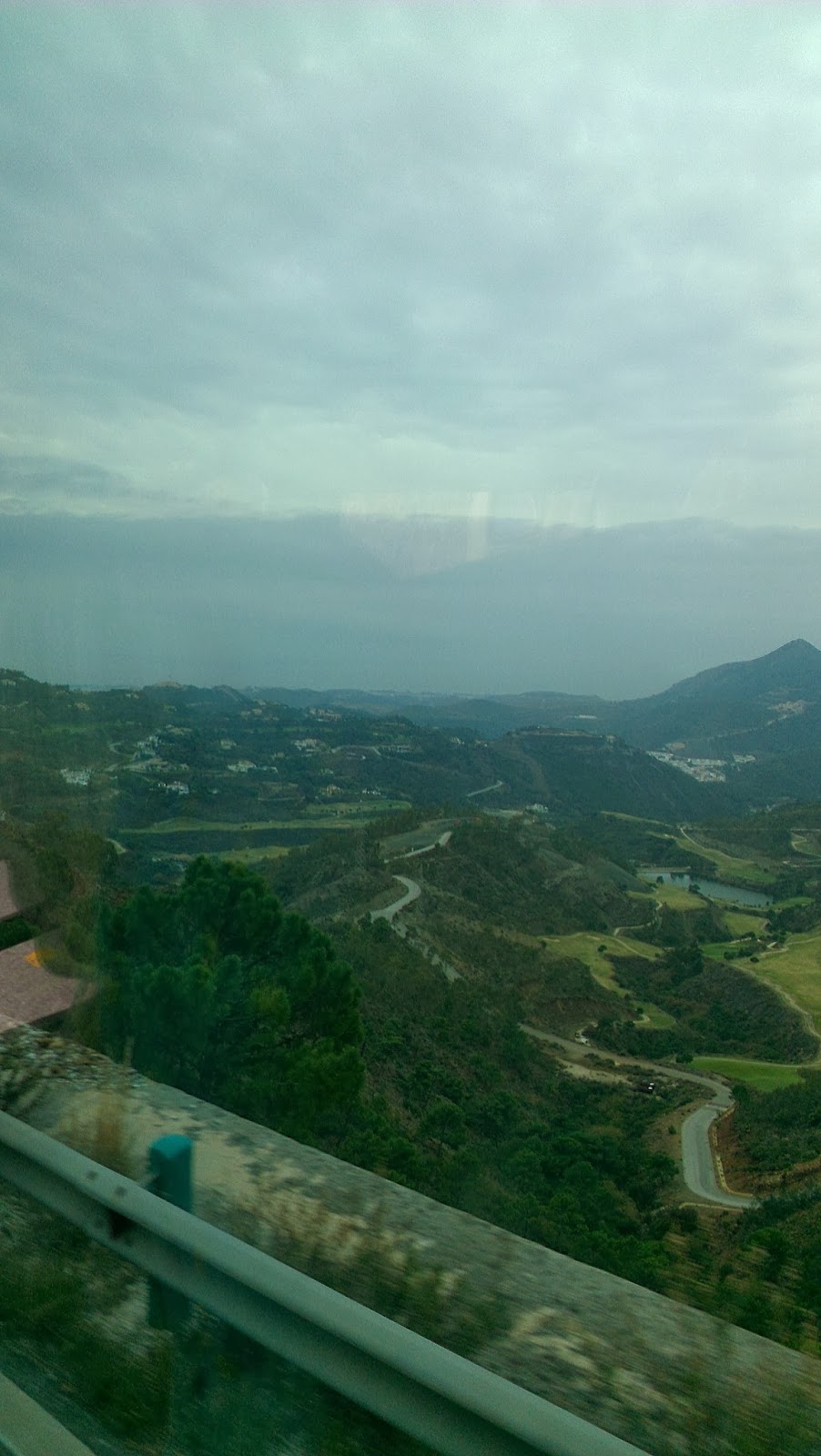 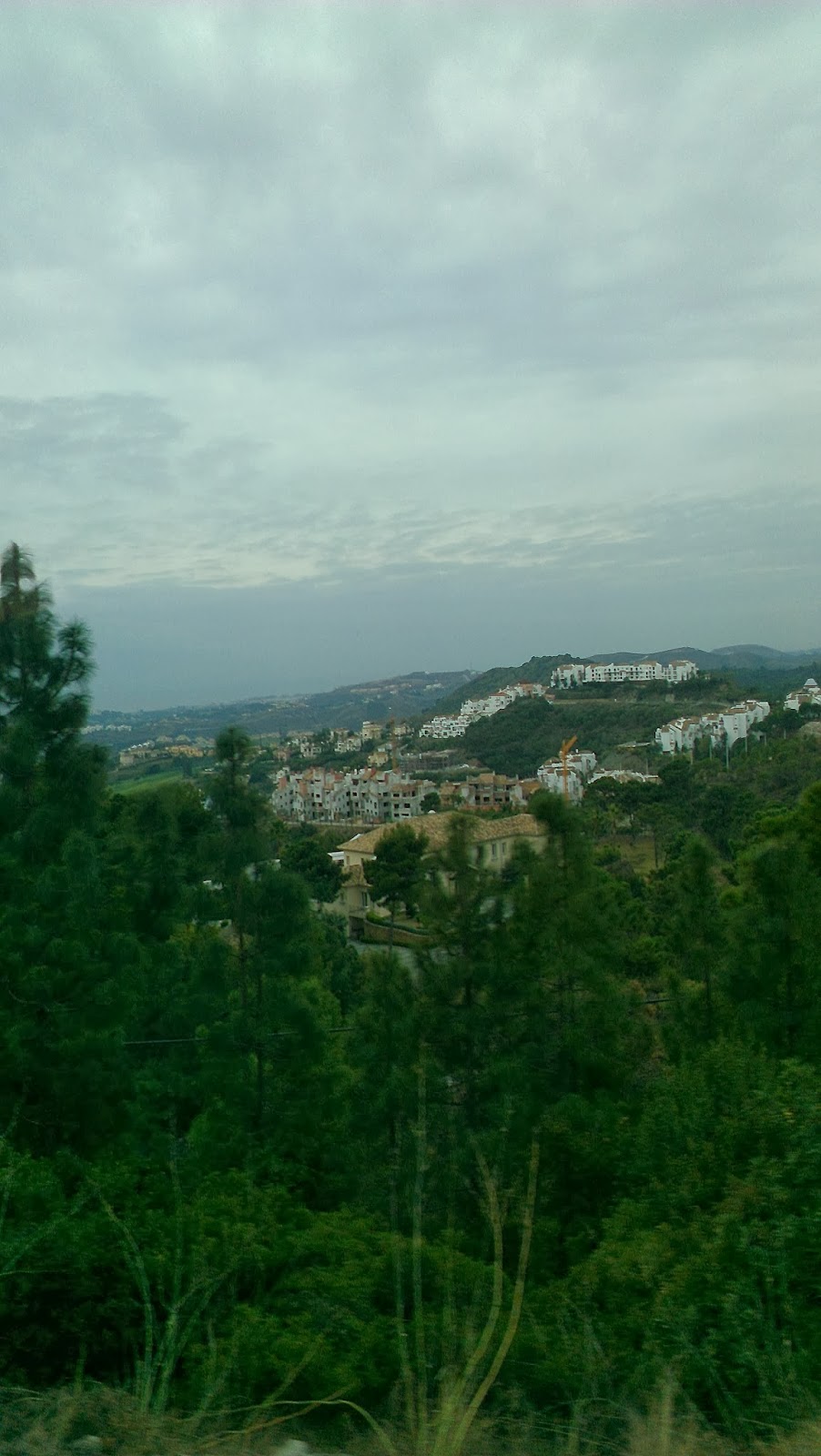 I’ve never gotten carsick before, but I was sort of glad that I hadn’t eaten anything yet, since the winding roads and sharp turns through the mountains felt more like a slow-moving rollercoaster than a charter bus. With the chatter of old Spanish ladies (one of whom had brought a twittering parakeet along for the trip), and the bus’ soundtrack of easy-listening Spanish style jazz muzak (including a sax-muzak version of ‘Careless Whispers’) as my background noise, I soaked in the gorgeous mountain views and tried not to get too excited as we got closer and closer to San Pedro.

Unlike in Ronda, where the bus stopped at a proper bus station, in San Pedro, the bus just stopped in the middle of the street (at least that’s what it seemed like to me). Just to be sure I was in the right place, I asked one of the abuelitas, “Es San Pedro?” “Si, es San Pedro,” she replied. I exited the bus with a handful of others, all of whom seemed to be heading to other destinations nearby. I followed them to the bus ticket window near our stop and asked where I could find a taxi, since there were none visible at the stop. With my 2 heavy bags, I was not intending to hoof it to my hotel. The ticket lady directed me up the street, literally.

A short walk up a steep hill with an extremely narrow sidewalk, and over 60 pounds of luggage caused me to break a small sweat by the time I reached the taxi line. The driver loaded my things, and I told him where I was going. “Cuanto cuesta?” I asked. He laughed. “Poco poco” (though it sounded more like Popo… Andalusians NEVER finish their words!). He added something which I understood to mean that everything in town was very, very close. Sure enough, it seemed like all he did was circle the block, and we were stopped in front of Hostal El Labrador, my temporary accomodation for the next 5 days.

El Labrador is a combination bar / restaurant and hotel, but a sign on the front door mentioned that the bar was closed until January 20, so the main entrance was closed and locked. I was peering in, trying to figure out how to get in the place, when I heard a woman shouting over my left shoulder from above. Some auntie was leaning over her balcony trying to tell me which door to go into. We played a quick game of pantomime Spanglish and at one point, I was sure she told me to hit the tiger (el tigre), but soon realized she meant push the bell (el timbre). I did, and got a crackly ‘Quien es?’ from the call box. After identifying myself, a woman opened the door, and started speaking rapidly and motioned for me to come in the other door around the backside of the building, before she retreated back inside.

Not quite sure I’d heard her correctly, I paused at a door just a few feet away, then heard another voice behind me, this one from an older male. He’d apparently heard my interchange with the balcony lady and the proprietress, and saw my confused brown face and could tell I needed all the help I could get. He gave me a firm signal that said, yes, i should continue around the back. As I walked, I thought, ‘Wow, these folks sure are really helpful. I’d probably be well looked after in this town.’

After checking in with Inmaculada, the innkeepr, I entered my room. The place made my hotel in Sevilla look like the 4 Seasons. It was clean and neat though, and it IS only temporary, so… no pasa nada (still don’t know if I’m using that right).

Unfortunately, though, it seems that the wifi does NOT want to cooperate, so I am on a communication island right now. Not good, as I need to get in touch with my potential roommate to meet over the weekend, and I’d like to see if my school coordinator has responded with when I should arrive on Monday. I tried to restart my PC to see if that would help, but good ol’ Windows decided it wanted to install 34 updates before restarting, so I’m sitting here waiting on that now. I think I’ll just head on out to take a look around for a bit while it finishes. But it being siesta, I’m not sure exactly how much I’ll be able to see.