Maybe it was ‘cause Mercury was in retrograde. But yesterday was rough. Much harder than it needed to be. It started out well enough. My 2 classes at the high school where I teach English went well. The students were engaged – which is all I can really ask for most days.
But then I realized that I’d booked 2 private lessons back-to-back that day and hadn’t allowed myself enough time to get between the 2 locations. No worries, I thought. I’ll just ask the first student if we can shorten the lesson to 30 minutes. Since it’s our first class, we’ll just use it as a ‘getting to know you / setting expectations’ meeting and I won’t charge for it. That’ll leave me enough time to bike to the nearby bus stop, tie up Roci, and catch the 5:15 bus to the next town for my 2nd lesson. I got this.
Except, I didn’t had this. Not at all.
My first class ended up being a little further than I’d originally expected, but I still made it to the lesson on time, and had a good chat with both the parents and the teenaged son I was to tutor. Although I did feel the son was a little undercover flirty with me. Who suggests that we can “sometimes meet in your bedroom” because you have a computer in there?
Anyhow, I ended the chat right on time, and as I was preparing to leave, the mom offered to give me a ride to my next place. I was just about to accept when I realized that I’d need Roci when I got back if I was gonna make it to my 7:00 class at the Escuela de Idiomas on time. If I left her at their house, she’d be too far from where the bus would drop me. “Nah, I’ll be ok,” I told her, and set off to catch my bus.

There was some after-school traffic that delayed me a little bit, so I wasn’t exactly sure how I was doing on time when I pulled up to the bus stop and saw a bus there, getting ready to close its doors and pull off. “Is that my bus? No, that can’t be my bus. Is it?” I signaled to the driver to open the door. Slightly out of breath, I managed to ask him if this was the bus I should take if I needed to be in Miguelturra by 5:30. He seemed to indicate that this was probably the best one. But when I asked if he would wait a minute – since I still needed to tie up Roci – he told me he was leaving right away. The next bus would be along at 5:15, he said. Oh! I thought. That’s the bus I wanted anyway. I’m good!
Except, I weren’t good. Not at all.
I quickly tied up Roci, and settled in on the bench to wait, eyeballing the 2 Ferrero Rochers that my 1st student had given me. I imagined enjoying them later as a delicious reward for successfully completing all my running around for the day, and even earning some extra cash in the process. I silently patted myself on the back. Look at me, getting things done, making things happen. That’s alright! Go me! 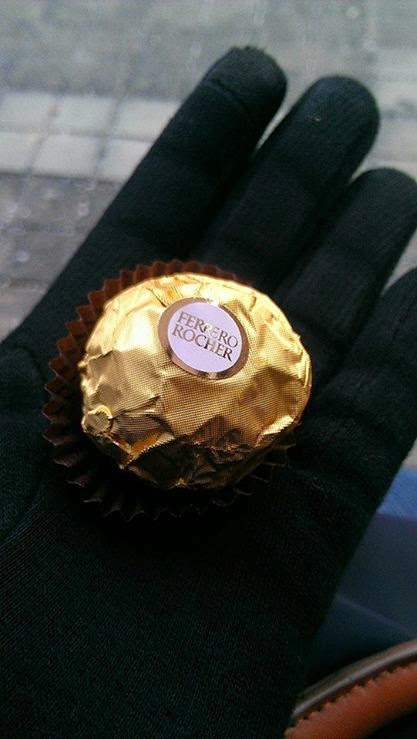 A few minutes later, the bus pulls up, I pay my fare, have a seat and we take off. After a few stops, I notice that it’s about 5:26, and we’re nowhere near my stop yet. Why is this driver taking so long? C’mon. Let’s move it! After a few more stops, I prepare myself to exit. I’d sent a quick message to my student’s mom letting her know that the bus was running a little behind, but I was on my way. After yet a few more stops, I realized I no longer had any idea where I was. I had never seen these buildings or streets on my route before. I’d been paying attention the whole time, surely I hadn’t missed my stop? Then it dawned on me.
Joder. I’ve taken the wrong bus.
There are 2 busses that go to Miguelturra, but only 1 of them stops near my student’s house. I, obviously, was not on that bus today. I got up, walked to the bus driver, and asked him if I could get off somewhere and get back to my stop. He suggested I get off at the next stop, but was pretty vague about how exactly I could walk from there to my intended destination (I just love it when Spanish people say, take this street, walk to the end, and then ask somebody else. HUH? Dem ain’t directions!). I got off, and headed in the direction he suggested. I asked the first people I passed – two older ladies – how I could get to Parque del Sol, right across the street from where I was going. Their response clued me in to just how off-the-mark I was. Heads thrown back in mock tribulation, hands gesturing and waving that I would need to walk, and walk, and then walk some more, perhaps to the end of the earth, perhaps until the end of time until I got to my destination. I thanked them kindly for the specificity of their response, and trudged on. After a few paces, I realized that I needed to abort this mission. If I had to walk as far as the ladies had said, I’d pretty much have to turn right back around to catch the next bus by the time I got there. There would be no time for a lesson. Which also meant, there would be no extra cash in my pocket today.
Joder.

I made an about face then set off to look for a bus stop where I could catch the bus headed in the opposite direction. I found the stop, checked the schedule, seeing that I’d probably just missed the bus (unless it was running late) going back to Ciudad Real, and had almost 30 minutes before the next one. I waited for a few minutes to see if the bus was, in fact, running late. At 10 minutes past its scheduled time, I gave up waiting and battling the cold and wind, and sought refuge in a bar a few blocks away. I needed something to warm my bones quickly. I ordered a shot of rum. After finishing, I reached into my wallet and discovered my second major mistake of the day. I’d been expecting to get cash from my lesson, but since that hadn’t happened, I now only had enough money to pay for the shot I’d ordered with a few spare coins left over. I had no way to pay for the bus. No problem. I thought. There’s still plenty of time before the bus comes, I’m sure I can find a cajero nearby.
As my sitcom-life would have it, however, there was no cajero nearby. I ended up walking almost 15 cold, frustrating, muttering-angrily-to-myself minutes to the town center until I found one and extracted money. Luckily, there was a bus stop right across the street, and a few minutes later a bus came along, and I headed back to Ciudad Real. With nothing to show for it, I might add. Actually, with less to show for it, given the money spent on 2 bus trips and 1 rum.
Well, at least I’d make it to my 7:00 class on time. I got back to town, reclaimed Roci and headed to the Escuela de Idiomas, pulling up a full 5 minutes before my class was to start. When I arrived at the classroom, the door was closed. An unusual sight, since my students are usually coming back from a break when I arrive, and the door is always open. I peeked in the little porthole-shaped window. The class looked fully engaged in some activity. I lightly tapped on the door and peeked my head in, getting the attention of the lead teacher. “Oh, hi, Kisha!” she smiled and hurried over to me. “Do you need me today?” I asked. “Welll… not really,” she replied. Of course. I should have seen that coming.
Feeling more than a little defeated at my overwhelming lack of accomplishment for the day, I collected Roci one last time, and headed home to sulk it off. I reached my piso, de-bundled myself, and tossed my bag on the couch. Reaching in to extract my laptop, my finger brushed across something unfamiliar. It was the Ferrero Rocher from earlier.
“Well…” I sighed to myself, “…at least the day wasn’t a total loss.” 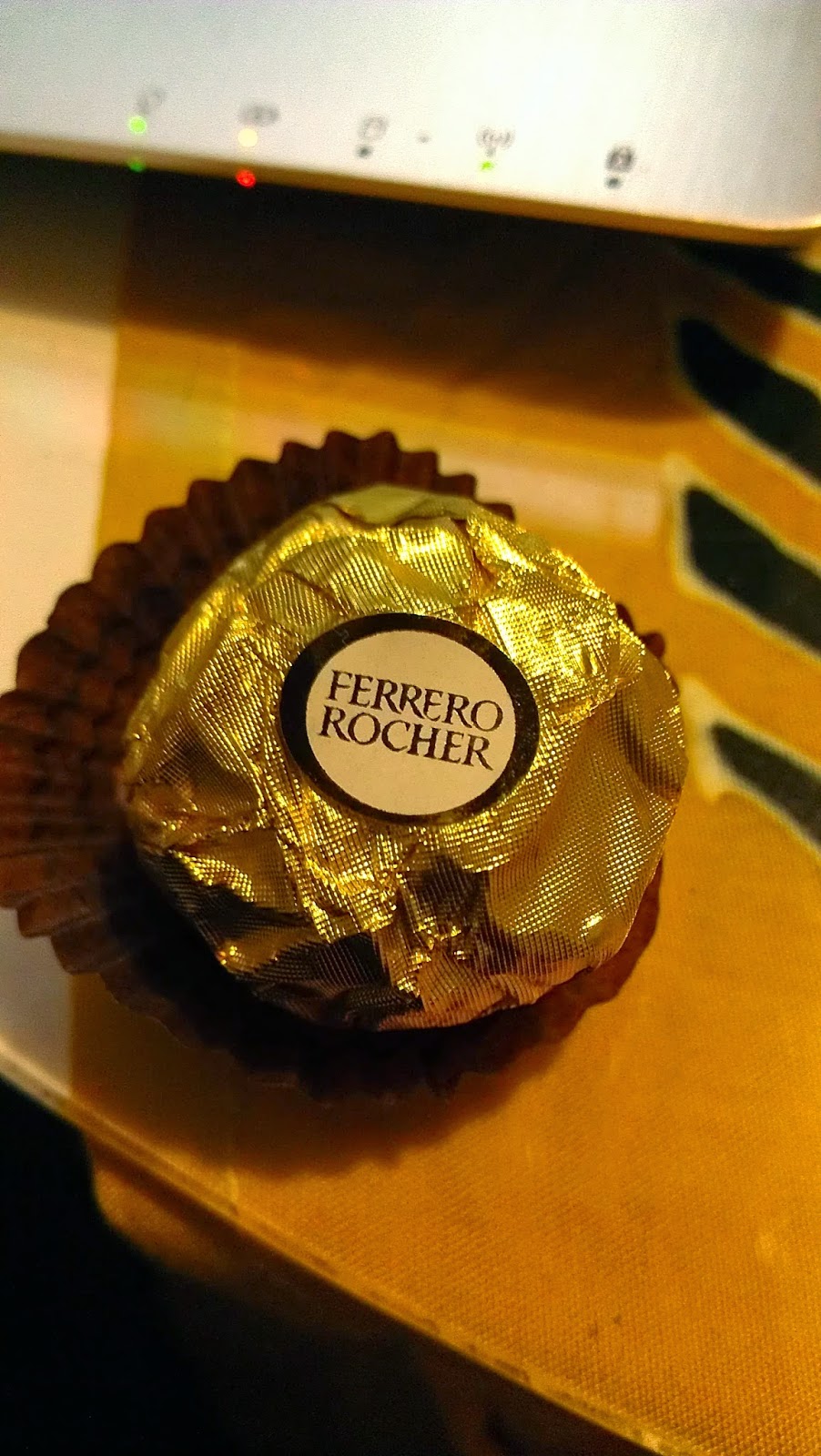 2 thoughts on “how do you say ‘mercury retrograde’ in spanish?”