I should know better by now than to commit to anything when I’m drunk, but, for some reason I found myself agreeing to the request that the patriarch of my adoptive Spanish family issued on a recent Friday evening while we were out celebrating my move to a new apartment.
“Kisha, you have to cook us some Southern specialties one day soon! I’ll buy the ingredients. You just come over and cook for us something that represents Geor-geee-yaah!”
On more than one occasion, I’d watched Pablo or his wife prepare a typical Spanish meal – tortilla de patata, paella, maritako – at their house; and had documented the steps, asked tons of questions, and snapped pics so that I could attempt to replicate the dishes for myself in my own modest little kitchen. I’d just finished showing Pablo the results of my culinary tutoring sessions – swiping through a collection of pictures I’d taken of the finished dishes. Included among the Spanish food photos, were a few pics of some dishes that were typical of my home state of Georgia – fish and grits, macaroni and cheese, barbecue ribs.
Upon viewing the photos, Pablo’s eyes widened with respect. Wowwww, Kisha! That looks amazing!” And then came his request.
‘Damn’, I thought. ‘That’s what you get for being a show-off’. But then, I realized that I actually would enjoy sharing a bit of my culinary culture with my newfound family. Besides, how could I possibly say ‘no’ to these folks who had given me food, shelter, taken damned good care of me when I was ailin’, and even helped me move all of my stuff not once, but twice since I’d been in town? That. Would not be southern.
A few moments later, I was entering a calendar appointment into my phone for the following weekend:
Southern lunch at Juana y Pablo’s
Almost a week later, Pablo sent me a message:
“Shall we have migas and southern tapas tomorrow in the countryside? We’ve all been invited.”
I squinted my eyes at the message. What the hell is he talking about? Countryside? Migas? Who’s invited us somewhere? Did I agree to do this this weekend!? Was I really that drunk?
As it turned out, I had indeed agreed to prepare the southern-style meal this weekend, i.e., tomorrow. Since agreeing  upon the date, a coworker of Pablo’s had invited his family to join a group of about 20 other people – more coworkers and their families – at his country house to enjoy the traditional La Manchan dish, migas. Instead of cancelling our southern lunch plans, Pablo had decided to just invite me – and my southern food – along for the ride. So now, instead of preparing a quiet little lunch at home for Pablo, Juana, and their two boys, I would now be preparing food for at least 20 people. No pressure.
After talking with Pablo about the logistics of the day, I discovered that this country house didn’t even have a kitchen per se. So, my planned menu of fried chicken, mac-and-cheese and cornbread was simplified to just fried chicken and cornbread. I could cook the cornbread at Pablo and Juana’s before we went to the country, and Pablo would bring along a portable cooking station so I could fry the chicken onsite. Hours later, after making my shopping list (and googling translations for some of the ingredients I’d need), Pablo and I hit the grocery store, then joined the rest of the family back at home where I marinated the chicken and prepped my mise en place for the cornbread, while listening to the James Brown station on Pandora. You know, for proper motivation.
The next day, Pablo came to pick me up. I had to admit I was a bit nervous about the whole thing. I know that Spaniards take as much pride in their regional culinary specialties as we Southerners do, and I felt like it was up to me to adequately represent my culture in this moment. What if the food turned out bad? I mean, I was cooking in an unfamiliar environment, without the same ingredients that I’d normally have back home. One of my worst fears is being the person who brings thatdish to a gathering. You know, the one that stays on the table, largely untouched, because it’s just… wrong.
In my nervousness, I managed to almost drop the pan of cornbread as I slid it out of the oven. In the process of saving it from falling all over the floor, I burned the sh*t out of my left index finger. When it was time to head out to the country, I was in such pain that I really didn’t care anymore how it all turned out. At least that’s what I told myself.
After we arrived, Pablo set up the chicken frying station, while our host, Manuel, started in on the migas. Soon, the other guests began to arrive. A flurry of names and double-cheek kisses followed. Everyone seemed excited about the fact that they’d be getting some authentic ‘Kentooky fried chicken en estilo Sureña’ to go along with the migas. In between breading and frying batches of chicken, I was also able to document Manuel’s process for making the migas.
After a while, everything was done. The food was placed on a communal table, and everyone oohed and aahed over it before digging in. 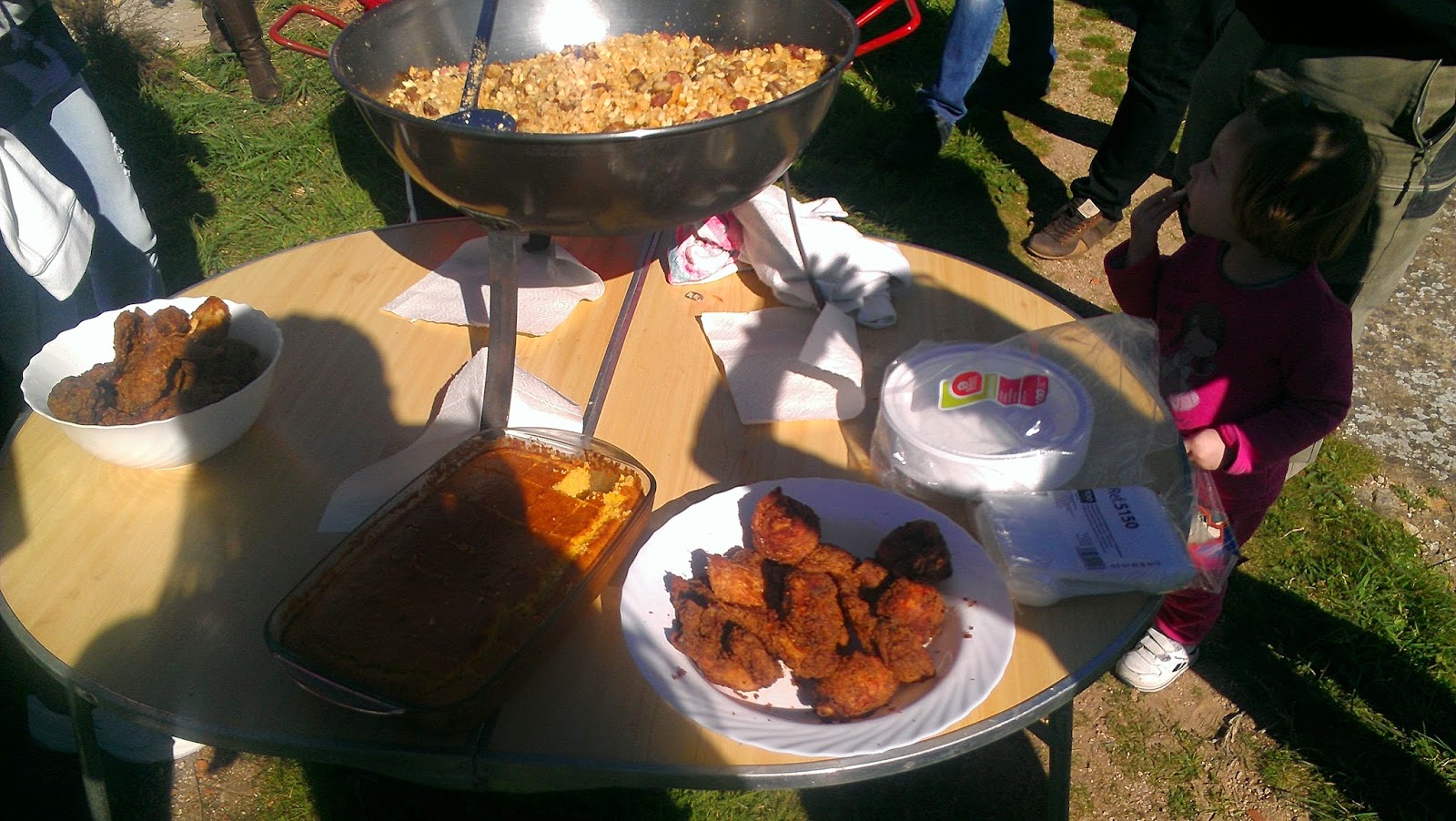 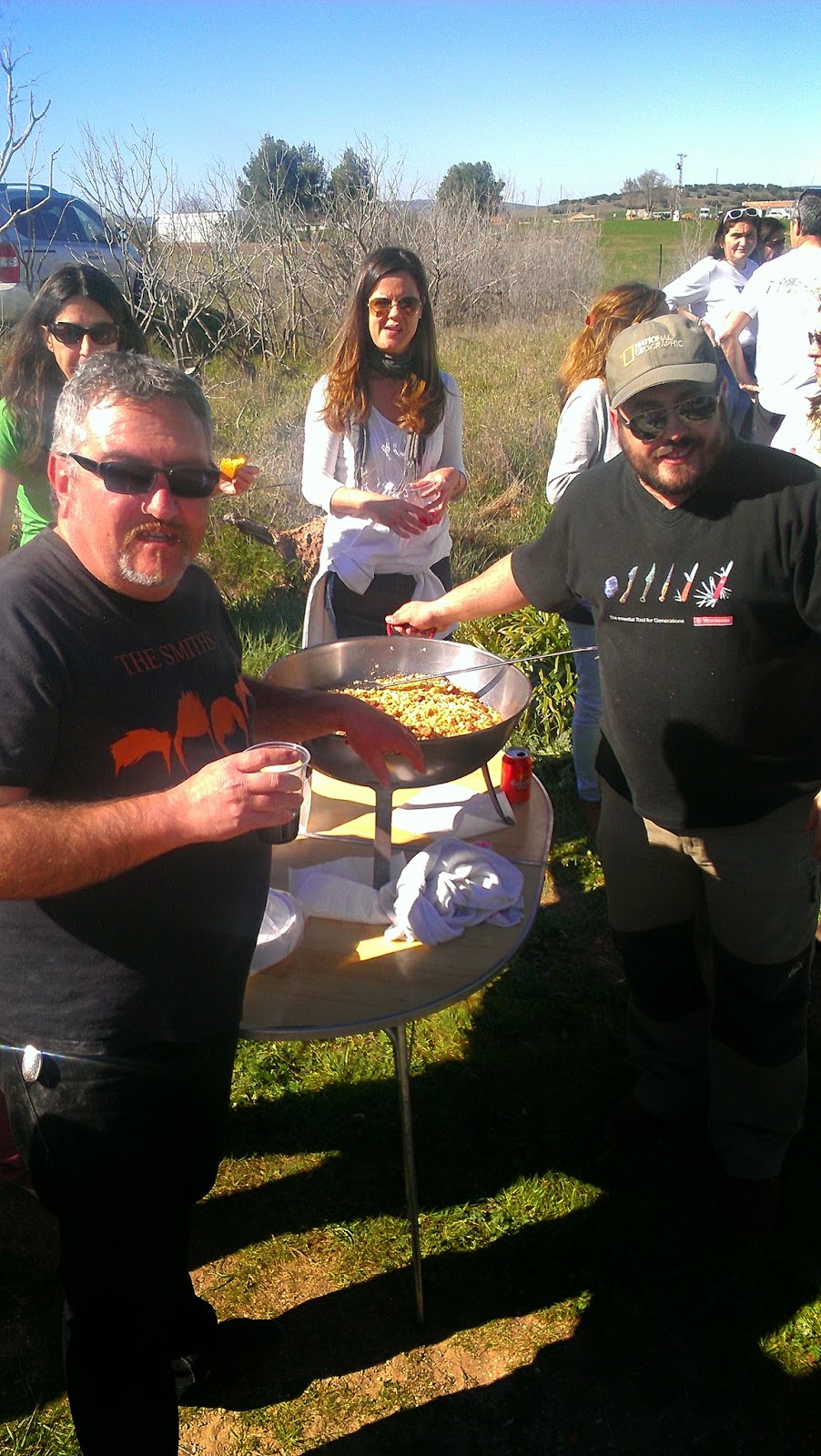 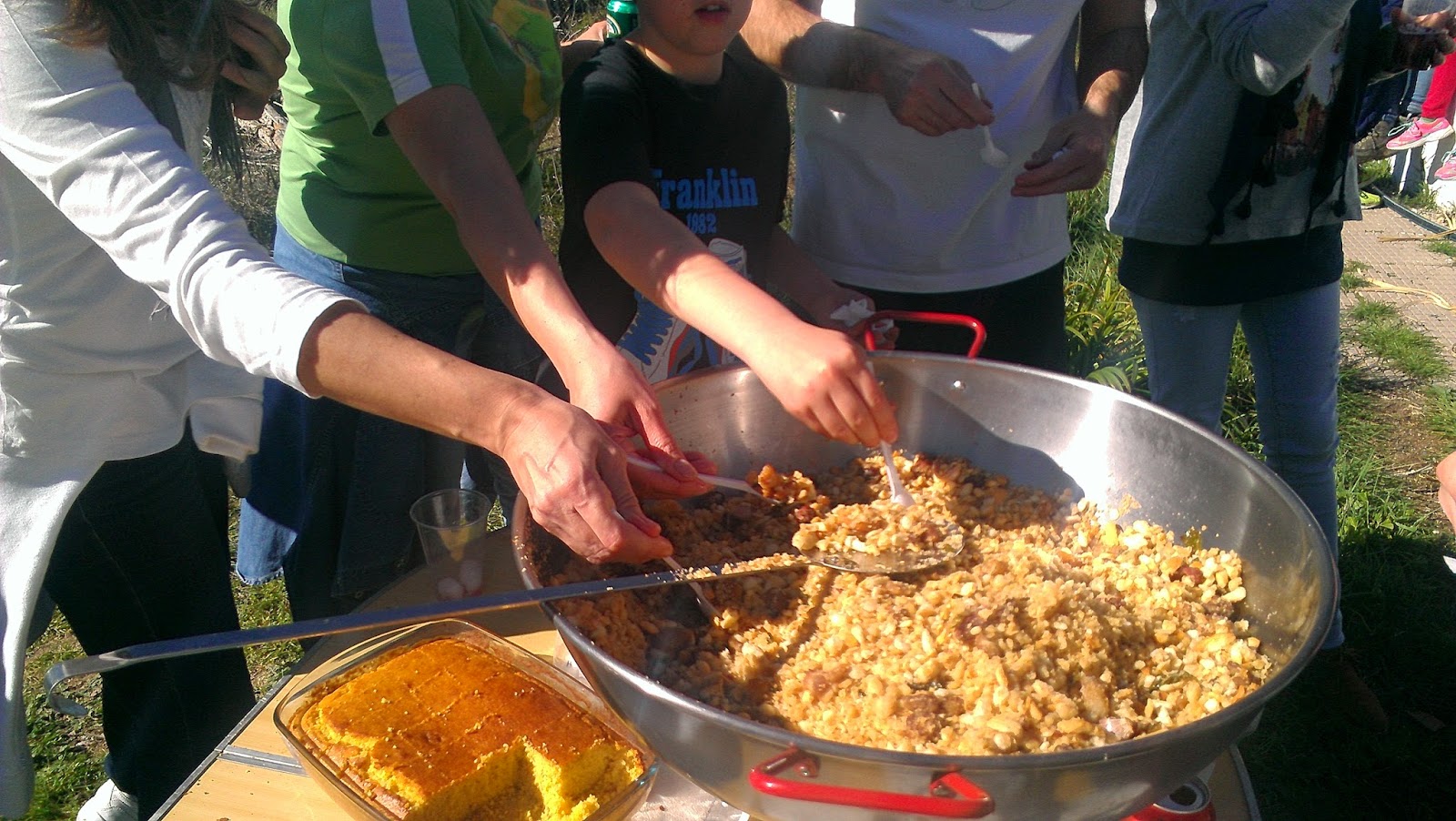 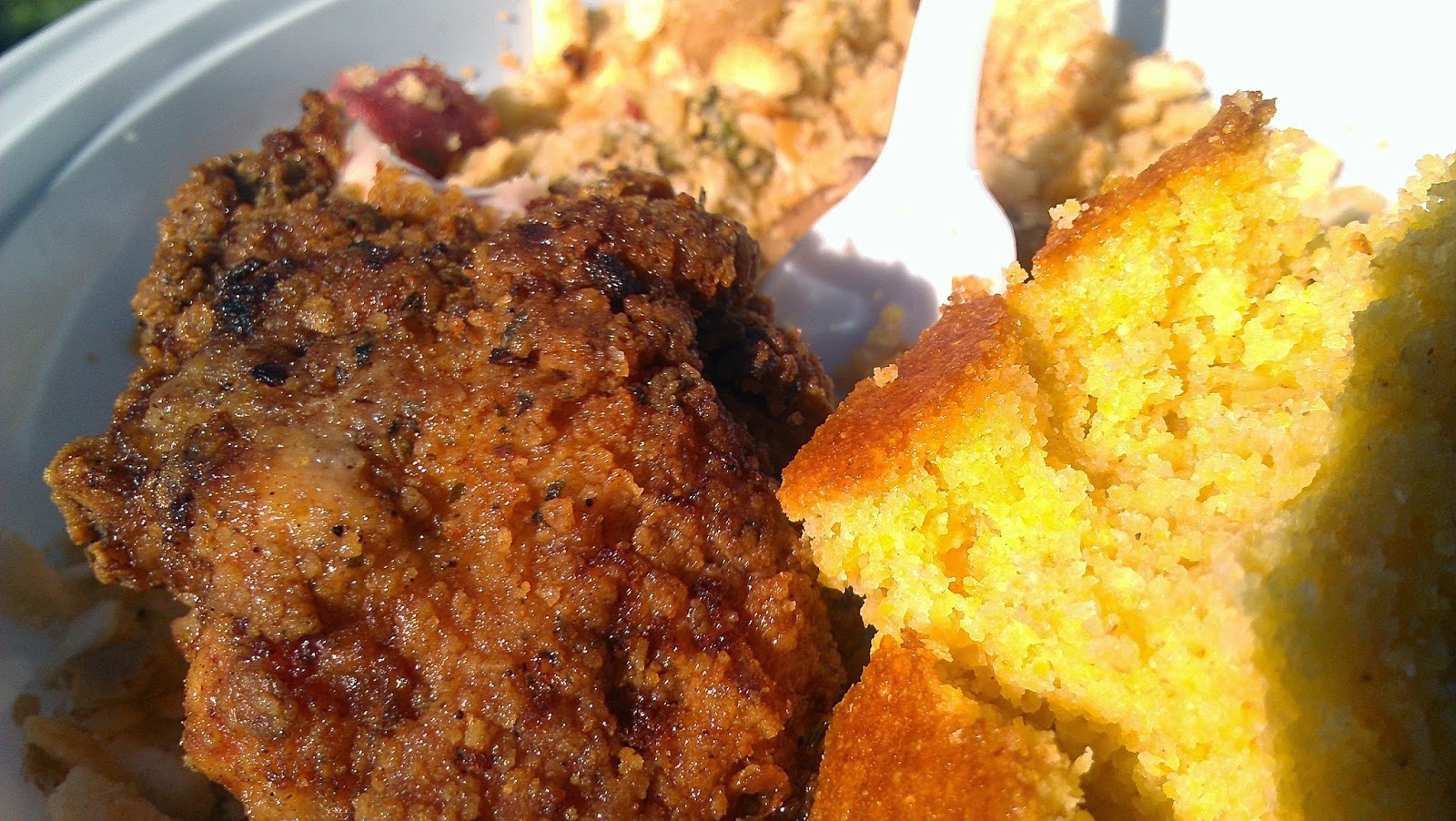 The chicken and cornbread were a great success! And Manuel’s migas was one of the best examples of the dish I’d had yet.
After lunch, the festivities continued with plenty of wine, then post-lunch fruits, then coffee and dessert, then mixed drinks. We didn’t end up leaving until long after the sun had retired for the day. I returned home feeling full and satisfied that I’d done my culture proud. 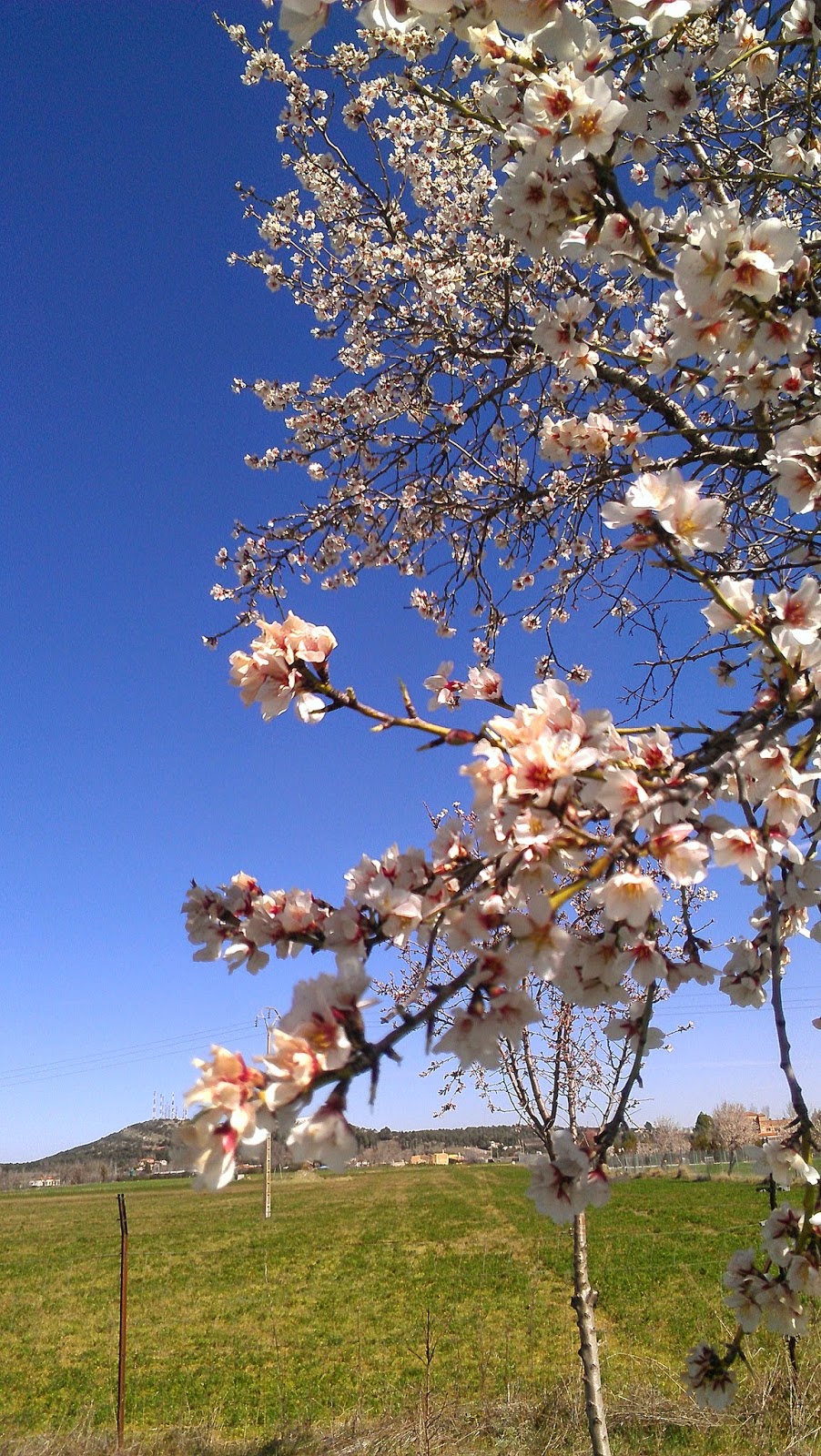 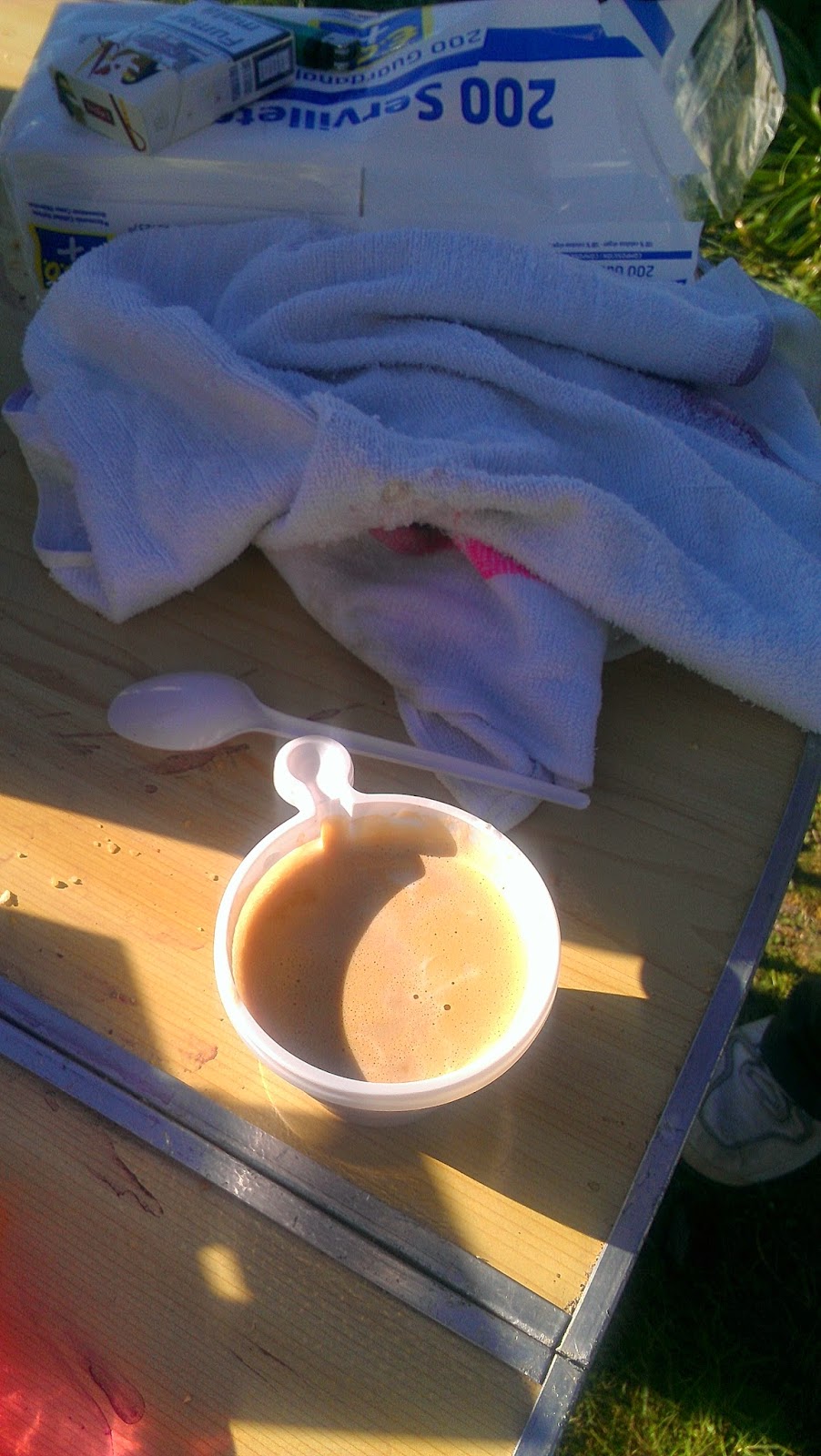 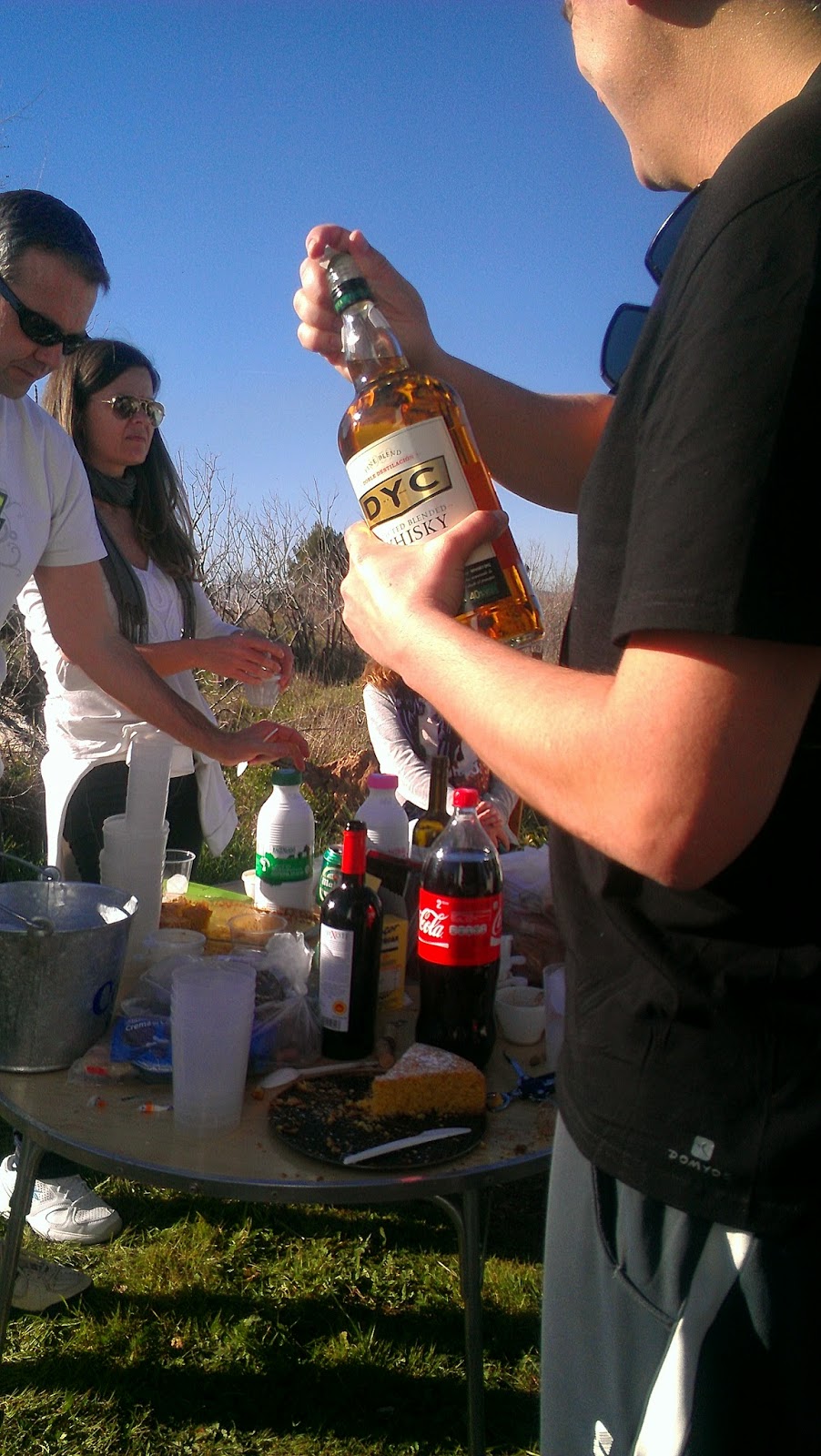 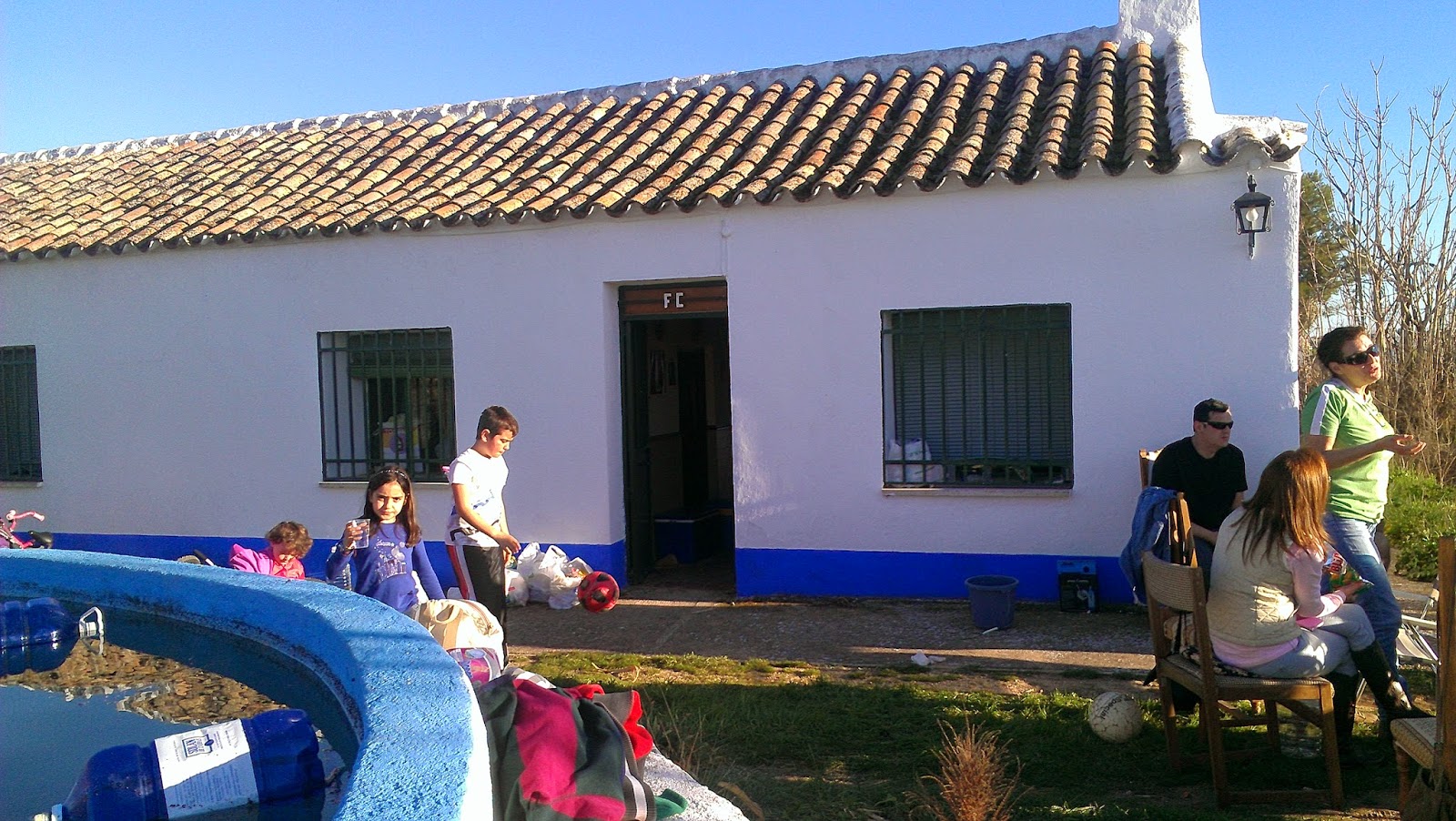 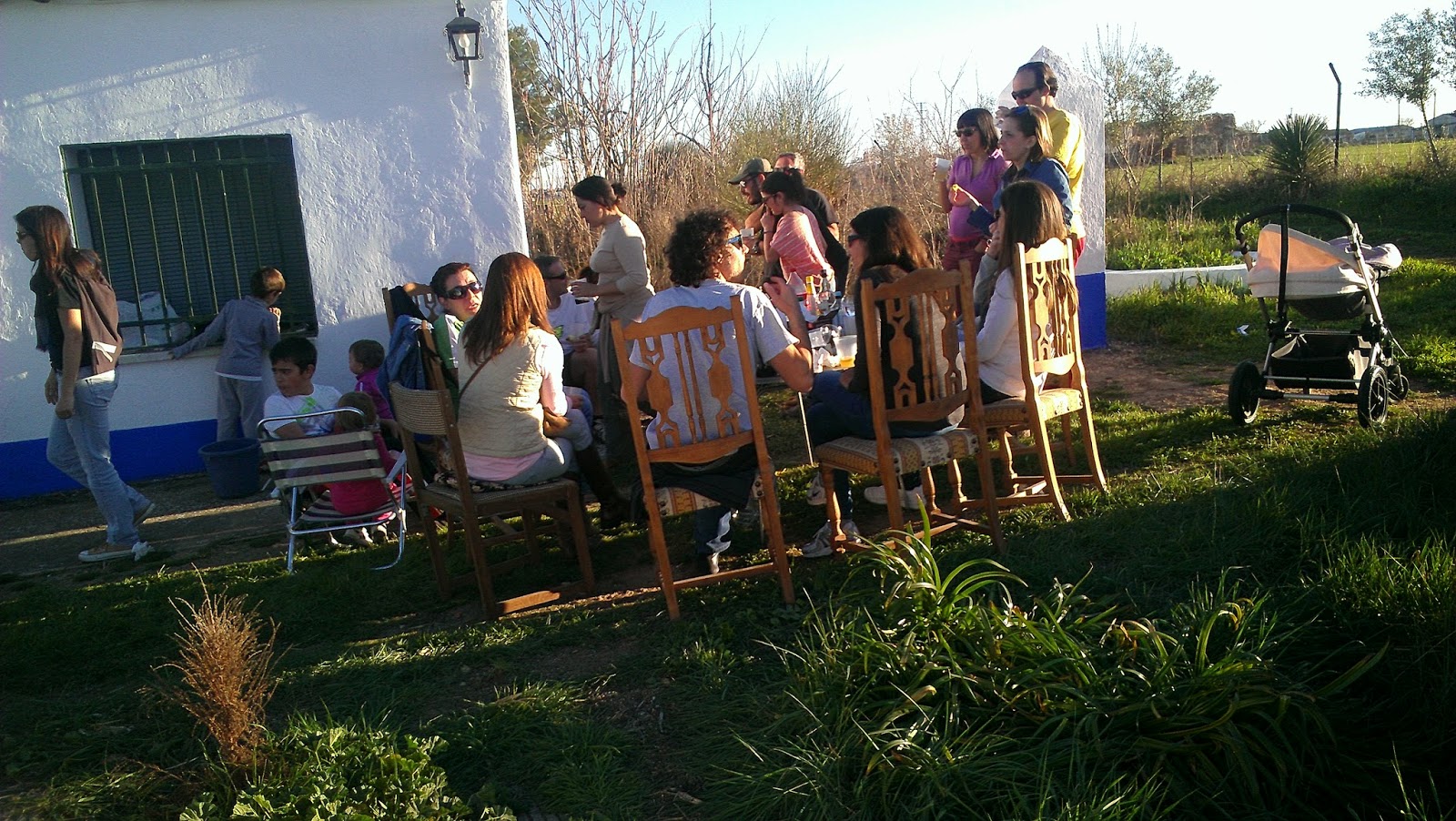 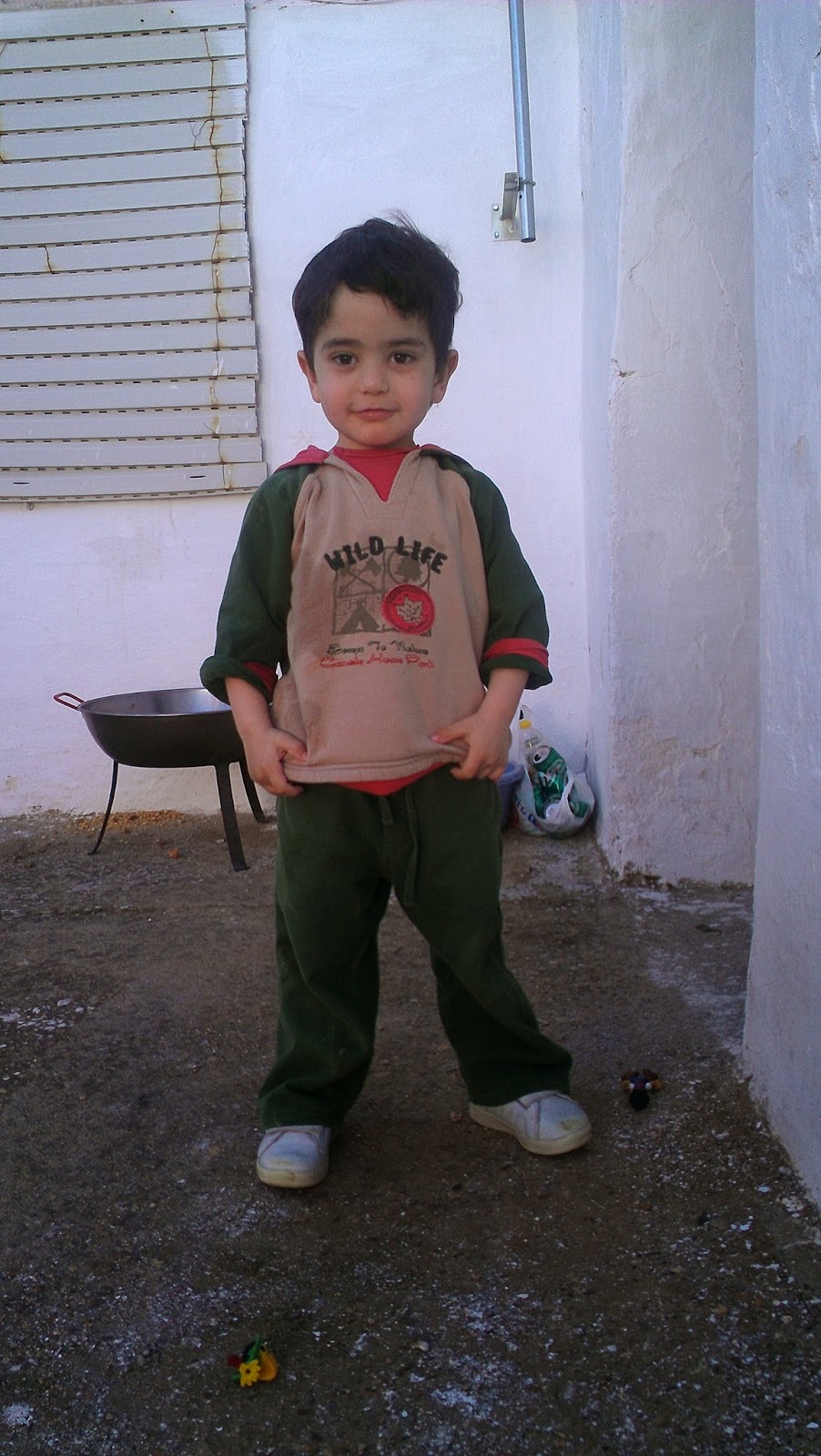 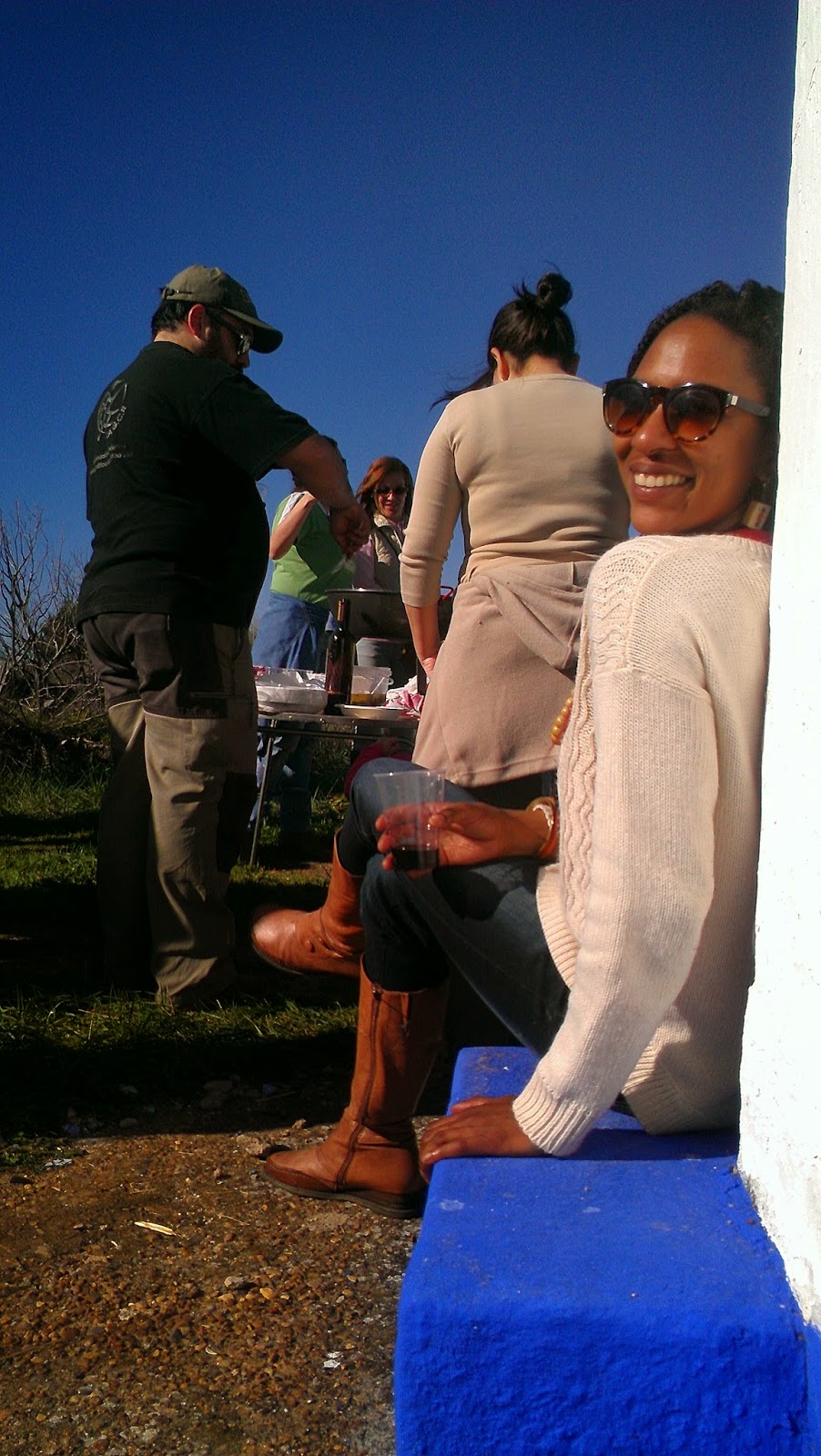